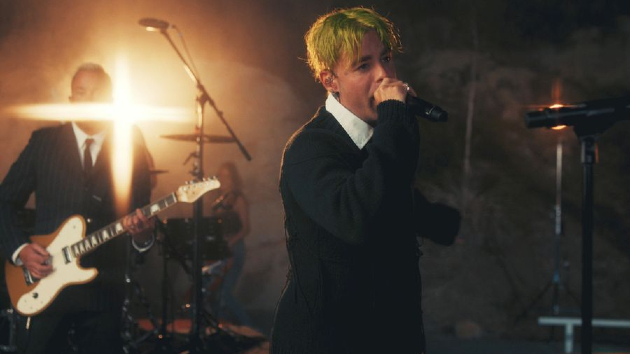 Mod Sun has premiered the video for “Amnesia,” a bonus track included on the deluxe version of his new album, Internet Killed the Rockstar.

The clip finds Mod trapped in the house of a superfan who forces him to take pictures with her and perform for her guests. He’s finally able to escape at the end of the video, where he runs to a graveyard to find his “Flames” collaborator, Avril Lavigne.

“Machine Gun Kelly always tells me that I’m the art, so why don’t we make a video that’s me being the final art piece,” Mod says.

“I wanted to make a video about an art collector, the biggest Mod Sun fan in the world and they have been collecting every piece from Mod Sun that they can get and the final piece is Mod Sun himself,” he explains. “I was making this and wondering when does this world of collection stop? Does it only stop when you actually collect the person? Is that the end goal? That’s what I made this video about.”

You can watch the “Amnesia” video streaming now on YouTube.

The deluxe Internet Killed the Rockstar album was released earlier this month. “Amnesia” is one of eight extra tracks featured on the expanded collection, along with an acoustic version of “Flames” and the blackbear collaboration, “Heavy.”